Florida Today Sea glass is getting harder to find. Sea glass originates from discarded bottles and tableware or glass from shipwrecks and household items lost in natural disasters. But with the increasing use of plastics and the growth of an eco-friendly attitude, collectors said the colorful treasures are becoming a thing of the past. "I've talked to people who were collecting it back in the 1960's and 1970's, and they said you could find a ton of it back then" said Richard Lamotte of Chestertown Maryland. "There is less sea glass since people got into saving he environment and the migration of containers into plastic. Both have impacted it." Quantities of some colors are severely limited. Colors such as orange, red,yellow, cobalt blue, purple, turquoise and black are very rare. Linda Jereb of Sebastian has made a full time business out of her love for sea glass and is a founding board member of the North American Sea Glass Association, She stopped weighing her collection at 1000 pounds. "I started collecting it on the Outer Banks of North Carolina 20 years ago," said Jereb, who makes jewelry out of sea glass. " I'd go out just about every day . You find it wherever you would find pebbles. There's less now because people don't throw their trash into the ocean. It's still out there but it has diminished." "It's like finding treasure. If you find a piece of red or orange sea glass, you're talking about it for weeks. And there's an archaeological component to it. Your 're finding something that was manmade that has been refined by the ocean." Jereb said. Lamotte said the glass that collectors find often started it's journey in rivers and streams. "It works its way to the sea" He said. "If you find green, white or brown, It's more recent." Lamotte added: "you see distinctly different sea glass in Florida than up north. There's not as much as you find in New England. The soft sand does not wear as well." Less sea glass means there;s less trash in the ocean, but it's not all good news, said Ed Perry, one of the organizers of the Sea Bean Symposium, was said the most common place to find sea glass in Brevard County is around Satellite Beach. 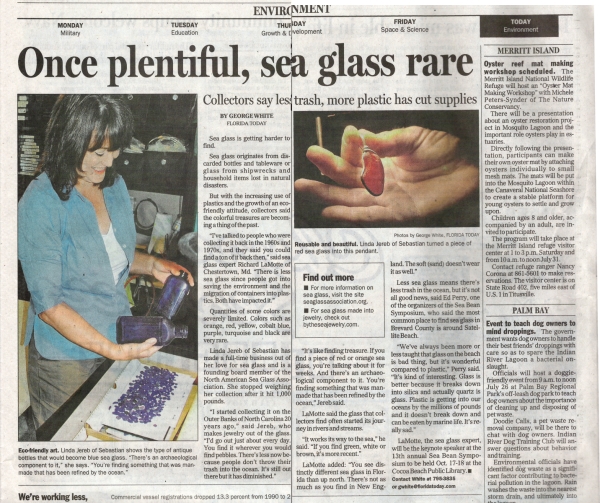