I began online 23+ years ago (at the same time as Google) on a small web page that my internet provider (Interpath the only internet provider on the OBX at the time) gave to it's subscribers for free. It was a small and crude WYSWYG site I did myself. This was long before we purchased our domain name "bytheseajewelry.com". Back then digital cameras we just starting to hit the market and they cost $$$$$, way more than I would even imagine spending at the time. Film was still the dominate form or photography.

Several film developers were offering floppy disks with your photos. This was one of the ways we had documented and have a record dating back to my earliest pieces.

I often chuckle when I look at some those first pieces, and then sometimes I wonder why I am no longer doing a particular settings. This was one of the ways we documented .

Examples of our first works transferred to Disks.

The Birth Of Digital

Shortly after the floppy option was available, I purchased my FIRST digital appliance, a $70 Mustek Scanner that I purchased at Sam's Club in Chesapeake Virginia (and actually got a $30 rebate on). The very first photos on the By The Sea site were in fact scanned on this device. For the time it was groundbreaking (for me at least). Items were laid flat on the scanner and then covered. I would edit using an old Adobe software that I got free with one of my computers.

These are examples of photos that were scanned.

When we first acquired our WWW Domain. 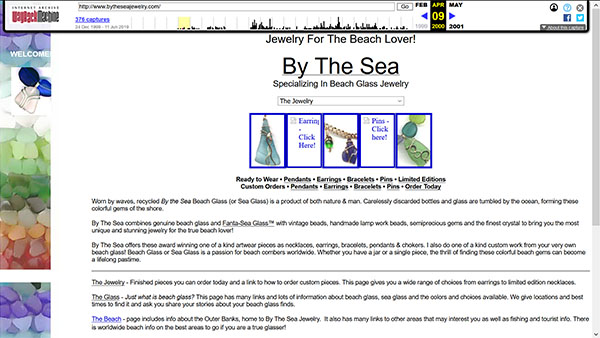 I continued for a while with these two methods of imaging to put jewelry online. It was maybe a year or two later I was given a Sony Digital Camera. It was large and bulky but took great photos for the day. That Sony camera, back then cost around $800, so it was a very generous gift. It had a Carl Zeiss Lens (which ROCKED) , and the storage Device was a Floppy Disk that actually fit inside the camera. Gosh I loved that camera so much as it opened up a whole new world and quality to my business. It was slow and bulky but took fantastic photos for the day. It had a rotating LED screen on the back so you did not have to be eye to eye to the image being shot. I still have many floppy disks (though my computer does not have a drive).

Later I purchased a F717, again with a Carl Zeiss lens. I still have this model however it has long since been surpassed. It also had problems one was recalled and fixed for free. When it happened again, I looked for alternative camera. My sister had loaned me another Sony Camera, but the software did not work with my computer and after a year or so of removing the memory card and pulling it into my computer, the slot for this broke and I could no longer use it.

My hubby, who is a careful researcher, decided on our current camera which is a Canon Rebel EOS T3. We also purchased a better than standard Canon macro lens.

Yes and it is true, ever since we used the Sony, we have been photographing our work in Marco mode. This means you are seeing every detail, some not even perceptible by the human eye.  Lately I have also started taking macro closeups of some of the jewelry so that you can see the texture of the Genuine Sea Glass ( the "c"'s that is ONLY visible in REAL GENUINE sea glass). Though there are some pieces (mostly earrings) that I cannot get close enough to to achieve this ( I think the closest I can get is 5-6 inches and with earrings you need to be further away since there are two items.

At first I was photographing jewelry in direct sunlight on a white piece of paper, editing out the background as much as possible. I found that if you propped up the jewelry, you could capture the color better and get a more dimensional photograph. It was about then that I started using shells and starfish as props. It was then that I noticed that these props also seemed to balance the way the camera read the colors. Putting brown in a photo with an opposite color, seemed to bring a truer rendering.

With direct light, I would often have problems with strong colors like deep reds and purples, so a lot of editing was required to get it picture perfect. Then about 6 or 7 years ago, I got a photo cube. Today most staging is still done outside in natural sunlight in a photo cube. I feel that only natural light can truly represent the color of the glass. It also demonstrates the translucence that most sea glass has.

Our props have changed over the years. We started as I said earlier, with shells and starfish. I then later progressed to organic tropical items like palm leaves and flowers that bloom here in Florida. Then I realized that my large collection of vintage glass bottles and jars were perfect back drops for sea glass jewelry since these were the origins of sea glass. Earrings where easier to photograph perched on the lid of a bottle or jar. I use this method sparingly now as MANY sea glass jewelers have copied this photographic style. I try to keep my site fresh and original. I feel when people copy each other it dilutes the strength of the original idea and makes it generic.

Since we mainly use a white background on our site (which is recommended for selling jewelry), I now use a white bleached coral, which gives that organic ocean feel but still keeps the site looking clean and coherent.

How our staging has changed over the years

You would not believe the editing I first did almost 30 years ago, I literally edited single pixels at a time. Today my editing is brief and simplified with macros and I swear, I could do it in my sleep. Some pieces still can be hard to capture though, silver with pastel colors can prove challenging when the light is low (Cloudy) as silver is a white metal on a white background.

We edit sparingly only trying to eliminate the background and insert our logo.

To Sum It Up

I will never claim to be a "photographer". As most people in this digital age, I am a point and shoot person. I do try and make my photos original and unique to my site so they stand out among now hundreds of "sea glass artists".

It is widely agreed by our customers that even though we go to lengths to photograph the jewelry truly and accurately that it still looks better IN PERSON!

I hope that even if you do not purchase our work that you appreciate our photos not only of our jewelry , but of our sea glass as well!

By The Sea Jewelry